We had an awesome weekend at the Budo Open this Saturday, July 25th at Cambrian College. Our team was small, but mighty!

As you know our number one priority on the mats is self-defense training, the original application of Gracie Jiu-Jitsu. But there is a sport side to the art. And some students choose to test their skill set in this arena and of course we 100% support them. How can we not? It is very exciting helping and watching our students prepare and challenge themselves.

The day started off with Kane – the Animal – Chartrand. This kid is just like his dad, Scott. He has this intense drive to get and stay on top of the fight. His first match he faced a kid who had the same drive. It was an intense back and forth exchange and Kane ended up with less points, losing the match. We still say it was the most exciting match of the day! He went on to win his next two matches and places second earning a silver medal. Check out this young warrior on the podium.

Next up was Cody Therrien.  This wasn’t Cody’s first tournament and you can definitely see the experience and improvement in his Jiu-Jitsu game.  This kid is 14 and already over 6 feet tall!  He competed like a warrior winning his first match and losing his second.  He handled the win and loss the same, like a true gentleman.  With awesome parents like Mike and Jen, there was no doubt he would represent our school with the honour and grace like he did.  We are proud of you Cody!

On to the adults!  Scott Chartrand and Steve Fortin delivered the excitement we were looking for in their matches!  Steve took the gold in the Adult White Belt Medium Heavy Division.  He showed great patience, strength and technique.  And a huge amount of improvement from his last year of competition.  So much he was honoured with an award for Excellence in Competition. 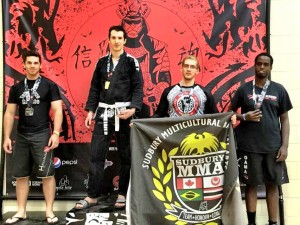 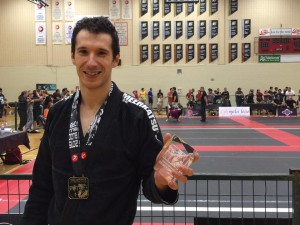 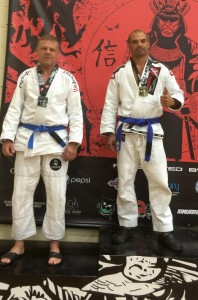 He also won Gold in the absolute division.  These matches were some of the more nerve wracking, exciting matches of the day.  Scott was getting tired competing against these big guys and of course his last match he had to face the biggest guy in the division!  He showed his huge heart and drive and came out with the Win! 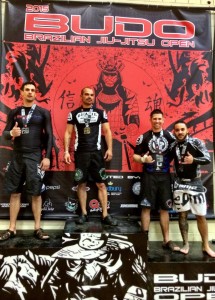 Scott got to rest a bit, have some lunch before he competed again in his No-Gi division where he learned a valuable lesson and something to take back and work on at the academy.  After all, you either win or you learn.  I think all of our competitors learned something at this tournament.

Steve and I had an amazing time watching these guys compete.  Thank you for all of your hard work and dedication.  And a big thanks to all of our amazing students at the academy who helped prepare these competitors for the last couple of months, who kept them safe from injuries and helped create the amazing learning environment that we all flourish in. 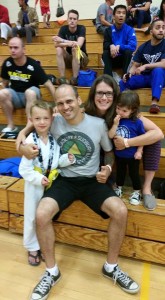 See you on the mats!

This site uses Akismet to reduce spam. Learn how your comment data is processed.